Publication of the volume "Ecclesiology and Nationalism"

Publication of the volume

The present (double) issue (57:3-4, 2013) of the well-known theological journal St. Vladimir’s Theological Quarterly, published by the St. Vladimir’s Theological Seminary (Crestwood, NY), is dedicated to an International Conference that was held in Volos, Greece, between 24-27 of May 2012, and was organized by the Volos Academy for Theological Studies, in cooperation with the Chair of Orthodox Theology at Munster University (Germany), the Center for Orthodox Christian Studies at Fordham University (NY, USA), the Romanian Institute for Inter-Orthodox, Inter-Confessional and Inter-Religious Studies (INTER, Cluj-Napoca, Romania), the Christian Cultural Centre (Belgrade, Serbia), the St. Andrew’s Biblical Theological Institute (Moscow, Russia), the Valamo Lay Academy (Finland), and the European Forum of Orthodox Schools of Theology (EFOST, Brussels). Under the topic “Ecclesiology and Nationalism” the present volume includes 17 articles by eminent Orthodox theologians and historians, which study the relationship between Orthodoxy and Nationalism (as a result of the close relationship between Church and State, in most traditional Orthodox countries), the issue of ethnophyletism and its contribution to the formation of the national Churches, the emergence of the so-called “Diaspora”, the issue of primacy, etc.

The first article, entitled “’Neither Jew nor Greek’: Catholicity and Ethnicity” has written by Metropolitan Kallistos Ware of Diokleia, Co-Chairman of the Joint International Commission for Theological Dialogue between the Anglican and the Orthodox Church, former Spalding Lecturer in Eastern Orthodox Studies at Oxford University and presently Emeritus Fellow of Pembroke College. Lucian Leustean, a Senior Lecturer in Politics and International Relations at Aston University (Birmingham, UK), presented the topic “Orthodoxy and Nationalism: The Autocephaly of the Church of ‘Moldo-Roumania’.” Paschalis Kitromilides, Professor of Political Science at the University of Athens, has written the following article, entitled “Enlightenment, Nationalism, the Nations State and Their Impact on the Orthodox World.” The next article by Dr. Daniela Kalkandjieva, Researcher at the Scientific Department of Sofia University in Bulgaria, approaches the topic “Orthodoxy and Nationalism in Russian Orthodoxy”. Dimitrios Stamatopoulos, Assistant Professor in the Department of Balkan, Slavic and Oriental Studies at the University of Macedonia (Thessaloniki, Greece), writes on “Orthodox Ecumenicity and the Bulgarian Schism”. Vasilios Makrides, Professor of Religious Studies in the Faculty of Philosophy at Erfurt University (Germany), presents the topic “Why are the Orthodox Churches particularly prone to Nationalization and Even Nationalism?”, while Assaad Elias Kattan, Professor in the Chair of Orthodox Theology at the University of Münster (Germany) writes on “Beyond Nationalism? The case of the Orthodox Church of Antioch”. The following article by Christos Karakolis, Associate Professor of New Testament in the Faculty of Theology at the National and Kapodistrian University of Athens (Greece), presents the topic “Church and Nation in the New Testament: The Formation of the Pauline Communities”. Paul Meyendorff, Fr Alexander Schmemann Professor of Liturgical Theology at the St. Vladimir’s Seminary and editor of this journal, writes on the topic “Ethnophyletism. Autocephaly and National Churches—A Theological approach and ecclesiological implications”. Dragica Tadic-Papanikolaou, Project Manager at the Christian Cultural Center in Belgrade (Serbia) presents an article, entitled “The Construction of the National idea and identity through ecclesiastical narratives”. Fr. Cyril Hovorun, Research Fellow at Yale University (New Haven, CT, USA), approaches the topic “Church and Nation: Looking through the Glasses of Post-Secularism”. Arch. Grigorios Papathomas, Professor of Canon Law in the Faculty of Theology at the University of Athens and at the Saint-Sergius Institute of Orthodox Theology in Paris, President of the European Forum of Orthodox Schools of Theology (EFOST, Brussels) presents an articled under the title “Ethno-phyletism and the (so-called) Ecclesial ‘Diaspora’.” Metropolitan John Zizioulas of Pergamon, Member of the Academy of Athens, Co-Chairman of the Joint International Commission for Theological Dialogue between the Catholic and the Orthodox Church and Professor at the Universities of Edinburg, Glasgow, King’s College (London) and Thessaloniki (Greece), approaches the topic “Primacy and Nationalism”. Dr. Athanasios N. Papathanasiou, Editor in Chief of the theological quarterly Synaxis (Athens), Tutor at the Hellenic Open University, and a member of the European Society for Intercultural Theology and Interreligious Studies (ESITIS), presents the topic “Signs of National Socialism in the Greek Church?”.  The following article by Dr. Pantelis Kalaitzidis, Director of the Volos Academy for Theological Studies (Volos, Greece), and Lecturer in Systematic Theology at the Hellenic Open University (Greece), is entitled “Ecclesiology and Gloabalization: In search of an Ecclesiological Paradigm in the Era of Globalization (after the previous paradigms of the Local, Imperial, and National)”. Davor Dzalto, Professor of Religion, History and Theory of Art and President of the Institute for the Study of Culture at the Institute for Philosophy and Social Theory of the University of Belgrade (Serbia) approaches the topic “Nationalism, Statism and Orthodoxy”. The last article of the present volume under the title “Political Orthodoxy’: Religion’s Involvement in the identity formation process” is written by Alexander Verkhovsky, Director of the SOVA Center for Information and Analysis (Moscow) and author of numerous articles, reports and a book on nationalism, religion, and politics in Russia, focusing on the current developments in Russia and the political use of the Russian Orthodoxy.
The volume is completed with the notes of the contributors. After the present English publication, the volume “Ecclesiology and Nationalism” will be published in Greek as well, by the “Ekdotiki Dimitrados”, the Publishing House of Volos Academy for Theological Studies.
The Front page and the Front matter of the volume are attached. 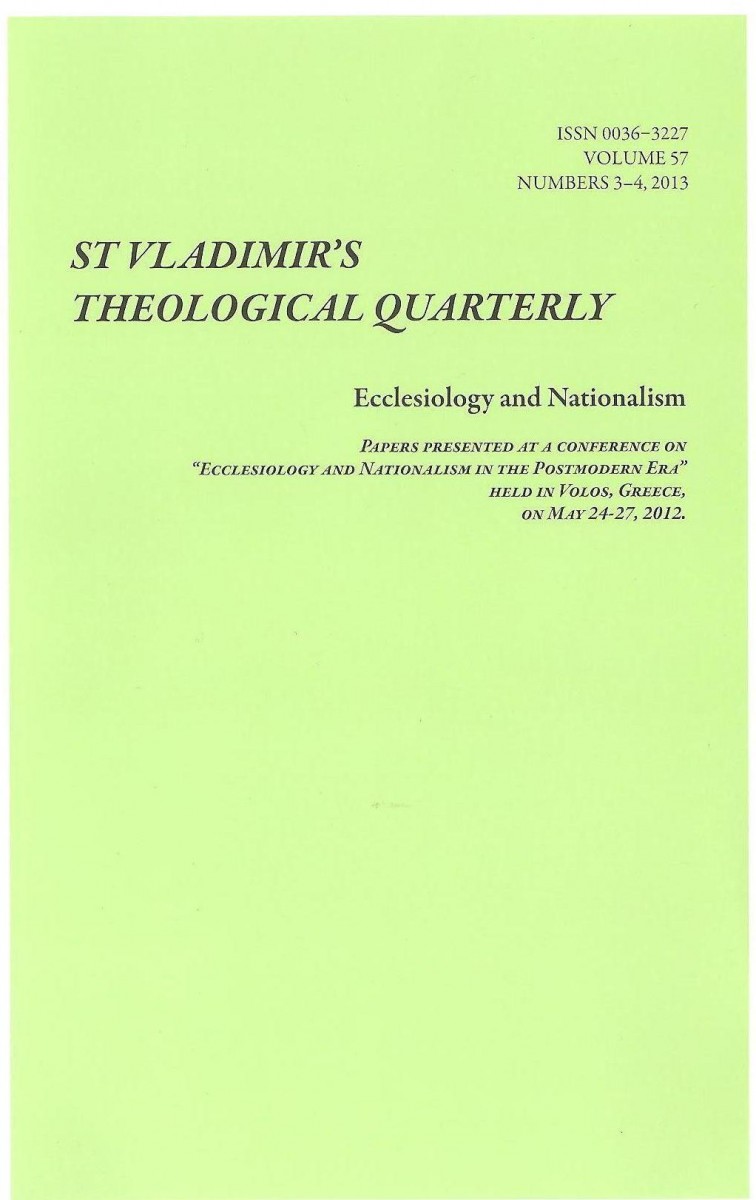