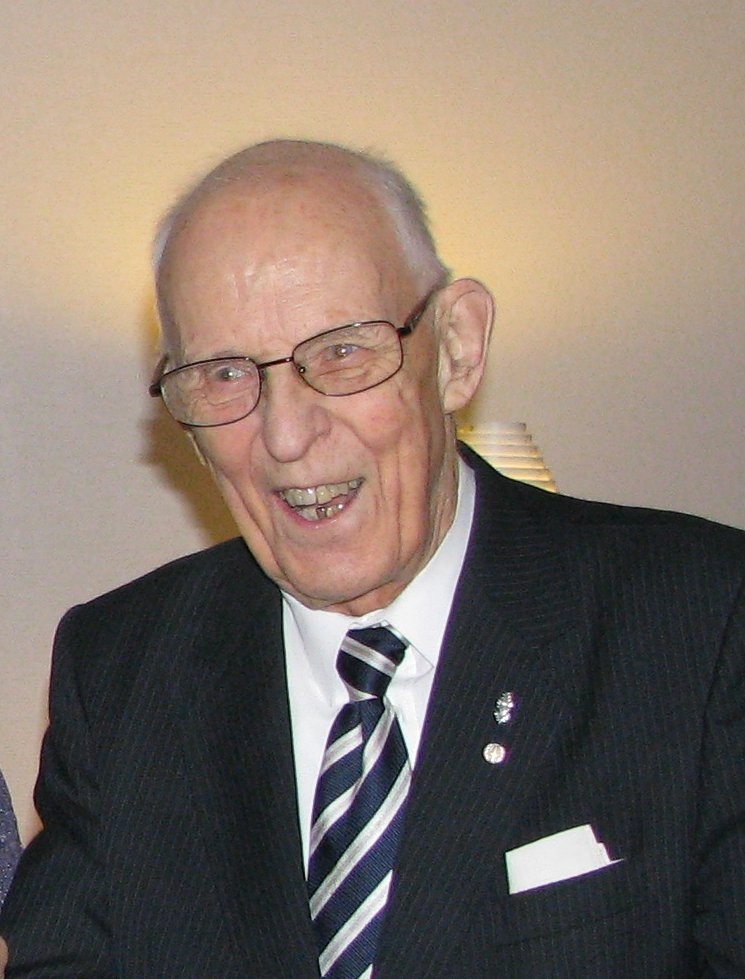 Dipl.Ing Paul Gundersen was born on 7th June 1921, in Helsinki.

Finland had gained its independence less than four years before he was born, so his life has encompassed virtually all of Finland’s first ninety-nine years as a nation. Paul’s father, Ragnar Gundersen, a Norwegian businessman who had grown up in the Netherlands, came to Finland before the First World War; his mother, Elina af Hällström, grew up on a substantial manor estate (and bravely defended her family during the Finnish civil war that followed independence).

Paul was about to start university when the Soviet Union attacked Finland in the “winter war” of 1939; he immediately volunteered for the army and served continuously for five years until he was severely wounded at the greatest Battle of Nordic War History in Ihantala in the summer of 1944. After the war ended, he studied chemistry at the Technical University, before joining a plastics company, during which time he was invited by two leaders of Finnish industry to attend the MRA / IofC conference centre at Caux, Switzerland. It was to be a decisive step.

From 1952 Paul took part in MRA/IofC's international work especially within industry, full time and without pay, for the following 19 years in different parts of Africa, the Arab world, Asia, America and many European countries. During this period he married a Finnish co-worker, Aino Poussa. From 1971 onwards he resumed his business career, holding a responsible position within the Nokia group, and travelling on all continents, not least the Soviet bloc countries of Eastern Europe. Of course these business journeys gave him ample chance to increase the global span of friendships which he maintained throughout life.

In retirement, Paul continued his work with the network of people he had built and he led business seminars (on topics such as “Moral foundations for a market economy”) in different parts of the world.

His active work life in retirement even extended up to the new Millennium when a Finnish-Russian teamwork was initiated. It started through the discovery of one of Paul´s books that the director of Vyborg Monrepos State Historical Architectural Museum Evgeni Trufanov had seen in a Vyborg bookstore. In the book Paul wrote about Baron Paul Nicolay. The lawyer Paul Nicolay, whose family was close to the Russian Czar, was landlord at Monrepos of Vyborg (1869-1919), a friend of prisoners, "izvozchshiks" (horsecab drivers) and fishermen, a champion of social justice, responsible for work in Russia and Eastern Europe within the World Student Christian Federation. He was a Lutheran cosmopolitan with the fond nickname "shepherd of the Finnish clergy".

This contact from Mr. Trufanov to Paul led eventually to string of activities in Russia including a Seminar in Morepos June 17-20th, 2005 and another one June 5th 2010 in the world famous Aalto Library in Vyborg under the theme "Paul Nicolay of Monrepos and his legacy – 150th Aniversary".

Paul’s various books were altogether published in eight languages, including three in Russian. “Thankful at every turn” comprises the writings of his first wife, Aino, during the final months of her life. “Incorrigibly Independent – a Finnish life” tells more of Paul´s life story and of lessons learnt. Later publications, including most recently “String of Pearls”, have focused on Paul Nicolai who worked in Tsarist Russia during the early twentieth century on behalf of the evangelist John Mott, and who influenced many Finns, including Paul’s uncle, Archbishop Lehtonen. “String of Pearls” shows how to both *let* things happen, and also how to *make* things happen – and how to find the wisdom to know when which is needed.

Paul is survived by his Norwegian wife Eva, and by Elina, daughter from his first marriage with Aino.

The Funeral will take place in Paul´s home Church in Helsinki, Munkkivuori Church on September 16th at 14.00.

Paul Gunderesen was over many years a good friend of St. Andrew's. St. Andrew's has published Russian translations of two his books.